The Simple Path to Wealth by JL Collins

These are brief notes on the main takeaways I had from JC Collins’s book “The Simple Path to Wealth.”

Why does building wealth matter at all?

You may be surprised to learn that JL Collins doesn’t believe it’s about retirement. He advocates for what he calls F-You Money, which, in effect, is freedom to call your own shots.

That’s all his proposed solution really boils down to in theory, and that’s why I like his approach. It’s common sense. Although it’s simple, I wouldn’t necessarily call it easy. This approach requires financial self-discipline that is, from what I’ve noticed, relatively uncommon.

See the average US historical personal savings rate, for instance:

It’s usually somewhere between 5% to 10% for the past decade, excluding the pandemic boost to savings rate in 2020 onward. That’s basically spending 93% of everything you earn, which barely meets the definition of “spend less than you earn.” As you will see, it falls far short of what Collins recommends as a savings rate.

Avoiding debt is straightforward. College is a common route for many, often financially supported by debt. Some people categorize debt into “good” and “bad” debt. Not Collins. He has, in my opinion, a better approach. The guidelines Collins lays out for handling debt are based on your debt interest rate, not the type of debt.

If your interest rate is…

Spending less than you earn is arguably the biggest challenge here. It’s directly related to your lifestyle. JL Collins suggests shooting for a 50% savings rate by living like a monk rather than a gilded slave. Of course, you can increase your savings rate in two ways: increasing your income or decreasing your expenses. Arguably you have more control over your expenses, so that’s what Collins seems to focus on.

Investing the surplus is the most technical aspect of the approach, but the basis is simple. As a young person, invest 100% of your surplus in a total stock market index fund from Vanguard, like VSTAX or VTI. In the book, he goes into a long rationale of why this is the right approach. Essentially, if you buy and hold VTI over decades, in the long run, you will outperform roughly 80%+ of active investors. The key here is buy and hold.

In Part II of the book called “How to harness the world’s most powerful wealth building tool,” the argument and advice for buying and holding pretty much only VSTAX goes like this:

There is some extra stuff about ordinary buckets (after-tax brokerage account) vs. tax-advantaged buckets (401(k) or IRA, Traditional or Roth). While these details become important over time, they are a second-order priority that comes after living a lifestyle that gives you a surplus to invest and investing in a smart manner. Admittedly, I find tax advantage bucket strategy confusing and boring at times.

When have you made it?

When you can live on 4% of your investments per year, you are financially independent. If you’re very risk averse, a 3% safe withdrawal rate is nearly a guarantee that you’ll never run out of money. Here’s a useful table from BlackRock laying out retirement portfolio success rates based on withdrawal rate, portfolio composition and payout period. Notice how high success rates are in the 3% inflation-adjusted withdrawal rate row. 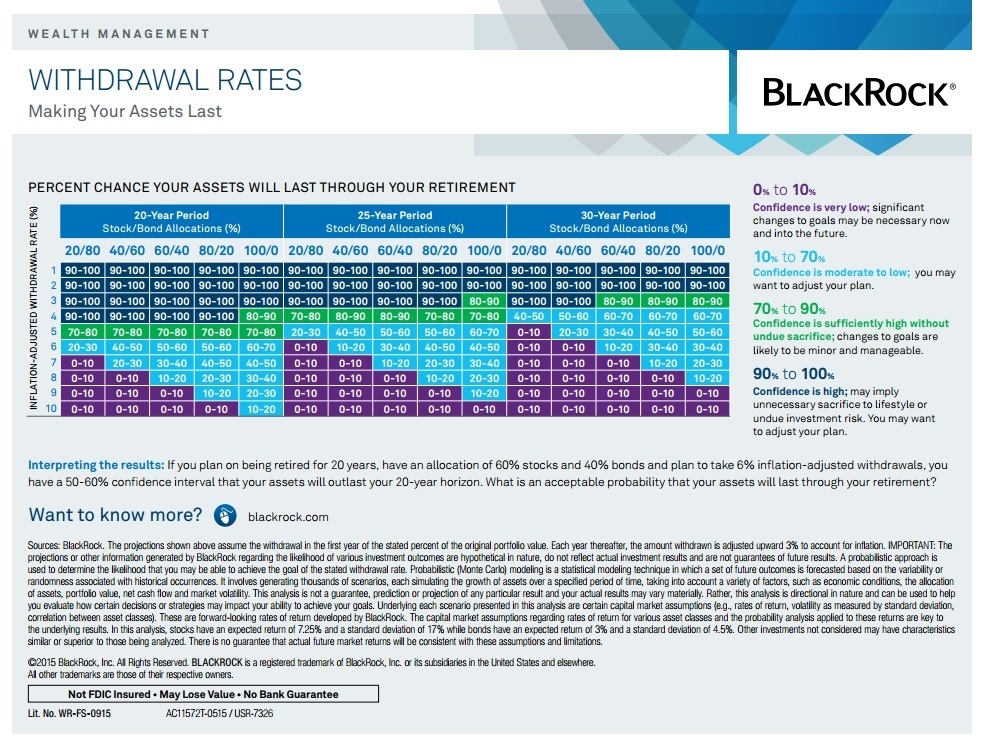 Note: BlackRock’s table differs slightly from the table in JL Collins’s book appendix. It would be interesting to get this investment returns data, backtest, and derive this table for ourselves.

JL Collins uses a refreshingly simple, powerful, and logical approach to building wealth. The contents seem accessible to pretty much anyone. If you want to get a feel for his writing style and approach, I recommend checking out his Stock Series articles. There is a substantial amount of overlap between the Stock Series articles and The Simple Path to Wealth book.